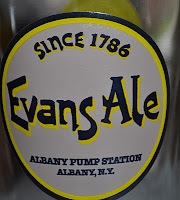 Back on International Stout Day I entered DrinkDrank's competition and was victorious!!  Well, okay i WAS the only entrant, but still Craig was as good as his word and sent a prize across the atlantic to me.

I received a lovely looking pint glass, details of the Albany Pump Station on the side, nice looking place with some tasty sounding ales. Cheers Craig.


Obviously I had to have an American beer to christen the glass, and only had the Anchor Brewery bottle 'Small Beer'.
I didn't know much about this beer so looked it up online, this is from their own website:

A unique low-alcohol brew reminiscent of an English bitter, with a light amber color and lots of hop character, Anchor Small® Beer is certainly not small on flavor.
Made from the second runnings of our Old Foghorn® mash, Anchor Small® revives the ancient brewing tradition of creating two distinct beers from one mash – a sweeter, stronger and more expensive barleywine made for sipping, and a more plentiful drinking beer. We sprinkle warm water over the Old Foghorn mash after the first “wort” has run off, creating a second, lighter brew. Technically, both beers are "ales" because they are made with top-fermenting yeast. Like its forebears, the result is an easy-drinking “session” beer. 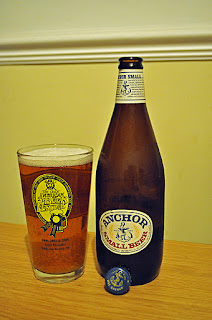 I noticed that on Ratebeer opinion is split between those who enjoy it and those who consider it a weak light 'whats the point?' brew that pales next to their other beers.

A light golden colour, small head that reduces to a ring. Very well carbonated, perhaps a tad too gassy.
Aroma is light citrus with some grain and cereal. Its dry and crisp, light biting citrus and malts, thin in the mouth, a little oily but great fresh flavours of fruit and small amounts of caramel sweetness.

I'd certainly drink it again, it does exactly what its supposed to do, a session bitter that I wish I'd had a session on rather than just the one bottle.

Perhaps this is how the British brewers should make their new lower alcohol 2.8% beers, and get some flavour into them.

Every January 25th is celebrated as Burns Night in Scotland, Robert Burns with traditional food, verse and music. Me, I love haggis but the wife will not entertain the idea and I don't think the kids would try it either. And seeing as I do not drink whiskey I'm left with Scottish beer, ah well, never mind! (I'm actually out tonight so it was last night I sampled these) 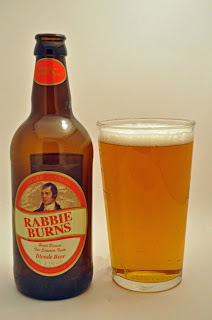 Firstly the Blonde beer, pours nicely carbonated, pale yellow in colour with little bubbly head. Slight citrus aroma with cereal. Biscuit base malts, light zing of lemon, slightly sweet and oily texture. Very little in the way of hop bitterness, and the whole thing ends quite quickly in the mouth. But its inoffensive and easily drinkable. 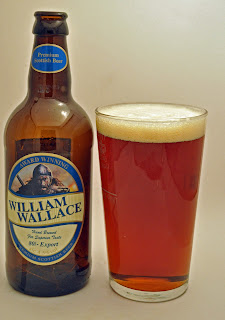 Next up the William Wallace, the 80/- Export has a reasonable sweetness to the aroma, not much else. A nice amber in colour, medium body, its got a lot of sweet malt, and a little fruit. It has a nice dryness, but none of the peaty or smoky character that you may be expecting with some Scottish shilling beers.

Overall two easy to drink but quite average beers on offer currently in Aldi.

So now its "Tesco - The Big Price Drop Increase" apparently, not surprising after their recent bad profits news.
Pretty much all the range of 500ml UK produced bottles which previously ranged from £1.69 to £1.89 are now all £1.99.
The few stronger beers, that were already over that margin ie. Old Tom, Marstons VSOP, seem to be at similar prices as before.
Their 330ml selection I was unsure whether it had been effected, although I noted Brewdog Punk IPA unchanged at £1.49.

As we are all used to these pricing games, I'm sure no-one will be surprised when in a month they 'drop' the prices again, potentially saving us more money gawd bless 'em!
Down to the prices that they were, um, last week!

a big Stout round up

Little run of stouts recently either side of some night shifts and the holidays, some good, very good at that, some not. Two of the five are welsh beers. 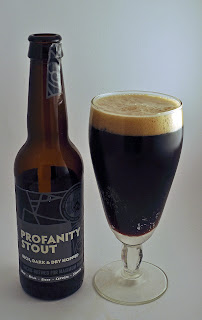 The Sainsbury's beer competition last year produced one beer that was roundly praised, even surprising people that it was not more highly placed. I never got to a store whilst the competition was on, so missed most of the beers but a few weeks after I picked up two bottles left on a clearance shelf, the last bottles of the Williams Brothers Profanity Stout.

Dark black ruby edges. Aroma of coffee and malts but also hop fruits coming through. Great full body, chocoloate, creamy, nice bitterness, rich coffee, rich figgy fruit. Excuse me while I go dig the other bottle out of the shed.


Pen-lon Stock Ram , bottle conditioned stout, 4.5%, Pen-lon are based in Ceredigion, West Wales, and all their range are conditioned and vegan friendly made on their farm. Previously I've had their Chocolate stout which was very good, but their bottles are still not easily obtained in South Wales.
It has conditioned well, light carbonation, reasonable full in the mouth. Aroma is light chocolate and ash. Taste is a little odd, there is coffee, its yeasty,  but also some slightly sour fruits, blackcurrants. Its also got a faint cheesy quality. Overall unfortunately I was not that impressed. 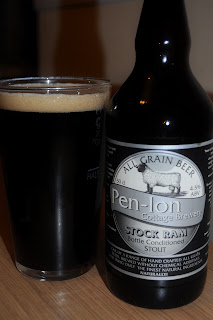 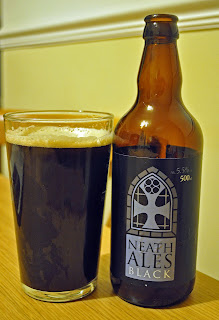 Neath Ales Black, this was brought to me in my christmas stocking, coool santa thanks!!
5.5%, 500mls, Neath ales black is light in the mouth, but nicely so, overall its flavours are light and nicely balanced with its body, making it very drinkable. There is bitter chocolate and rich fruit, an ash dryness, finishes with good bitterness. 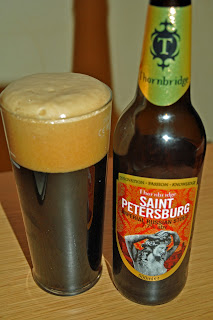 Saint Petersburg by Thornbridge, is remarkable in that it drinks nowhere near a 7.7% beer. This Imperial Russian stout is beautiful to look at, in and out the bottle, to smell and taste. Beautiful mocha head, aroma is roasted malt, smoke, milk chocolate. Deep flavour, although not as huge as i was expecting, licorice, coffee, good hop bitterness alongside a little metallic edge.
One everyone should try. 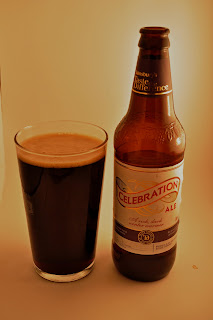 Recommended by the Folk & Ale blog I picked this up on an occasional visit to Sainsbury's.
Brewed for them by Black Sheep brewery, one I've always enjoyed beers by, its 6% and damn tasty.
Very dark brown into a black, thick but small head, solid body.
Chocolate on the nose and mouth, milk chocolate, coffee with sugar, dried fruits.
Obviously much more easily available that most of the above and well worth checking out.
Posted by arn at 22:55 > 0 comments 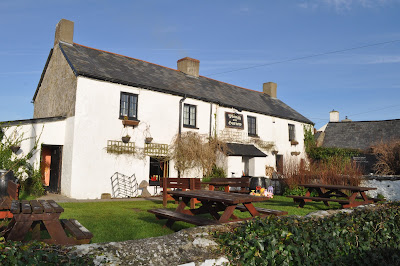 We hadn't been here for a few years, about five my wife reckons, when we had our daughter in a papoose on my back reaching out for blackberries from the hedgerows. We had a sunday lunch outside the pub whilst she crawled in the grass purple juice on her cheeks, on a lovely sunny day.

The Plough and Harrow is found in Monknash which is a 15-20 minute drive from Cowbridge in the Vale of Glamorgan through a few country lanes. You can do a great walk using the pub as a starting point, we just did part of it, starting going past the pub down the lane and a stony path (good boots needed) for 20-30 minutes and ending up on the Vale of Glamorgan coast line, fabulous views. The walk is great if you've an interest in photography, loads of  natural little waterfalls. ( Some photos here, more to be added over next few days)

So, back to the pub. A traditional country pub. Nooks, crannys,  bits and bobs on the walls and ceiling.  Oozing it from the pores. And that is meant in no way disrespectfully, you end up looking at the houses around it and imagine your self living there so you could be a local in this pub. You sink into the chair, and want time to stretch. We wonder if our kids could manage the walk we did so we could come back sooner.

An old building, fires and small bars, ales up front on pumps, five casks behind the bar.
No menu's, its written across the beams, as are the beers and ciders, abv's and prices.
Lunch was some traditional faggots, peas and chips this time, superb and priced fairly. The staff friendly and professional, absolutely no complaints there. 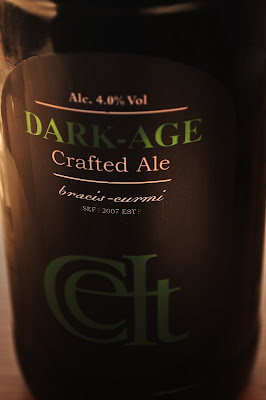 The Celt Experience are a brewery based in Caerphilly, Mid Glamorgan, also the home of Newmans. I'm not sure of the relationship between the two, it seems that Celt are an off shoot focusing on organic ales inspired by Celtic history.

Each bottle I've bought has a little historical statement, this one says
"This beers name comes from the Dark age. Folklore has highlighted many stories of Celtic warriors and kings that waged successful battles against the intruding Anglo-Saxons. None more than King Arthur, who legend has it, fought in 12 battles in the late 5th and early 6th century."
Each bottle is also very well presented, several awards for them have been won and rightly so. 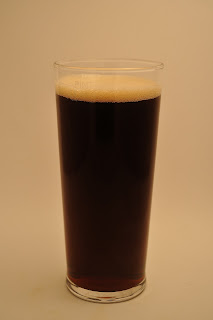 Aroma was muted but thats because I have a cold, but certainly roasted coffee and chocolate.
Nice ruby colouring through the darkness. Lovely and smooth, light burnt coffee and chocolate, but not to dark or strong. A little fruit sweetness and light brown sugar. Understated hop bitterness comes through, light carbonation, with a small creamy head all the way down the glass.

I would love to know who the brewers are at the two previously mentioned breweries, is there a difference or is it the same people? I ask because the Celt bottles I have had in the past are generally quite good, this Dark-Age a case in point, where as the Newman beers, (granted I've only had four), but they have not been as impressive.
Posted by arn at 22:09 > 0 comments

Into 2012, bringing you Welsh beer

Already we are only into the new year a few days and a couple of excellent posts are around, from Ghostie talking about his aims, Boak and Bailey's 'What wedge?' post, Leigh talking sense, and Tandlemans cracking post here.
Go read and enjoy, or not, whatever your opinions are.

For this year myself I had already been thinking about the blog and how it would progress.

A quick scan of the beer reviews I did last year showed about only 20% were Welsh beers.
I had noted this a couple of months ago and tried to address this, featuring beers by  Newmans, Purple Moose, Jacobi and Wye Valley.
So to this end I am going to focus more on Welsh beers this year on the blog.
I will still drink and review all other beers that take my fancy, but you can find many reviews on other blogs for the likes of Thornbridge, Magic Rock, Kernel et al, so I aim to bring Welsh beers you may not be aware of to a little wider attention.
I'm just an English beer drinking fella living in Wales and shall attempt to share what I find out.
(Regular brewery news, announcements and pub information is already brilliantly served by Brew Wales so I wont be going there.)

I've already got several bottles lined up, from the likes of Pen-lon, Celt Experience, Neath Ales,and  more from the Purple Moose and Vale of Glamorgan breweries.


(....but the beer geek side is still there and I have still to open that Mikkeller Breakfast bottle!!!).