Another one of the many pale ales produced by the excellent Kernel Brewery.
This is 5.3% abv, 500mls, bottle conditioned and I paid £3.69.

The hops listed are the US variety Summit, the Australian Galaxy and New Zealand Cascade.
And they put out some serious aroma, I was pouring this out at almost a good arms length and caught the tangerine orange immediately. Huge amount of sediment it must be said.

This has all that you want or expect, that lovely aroma, mid orange colour, hoppy orange and resin, pine, juicy, the texture is slightly oily, and the bitterness is lovely but not dialled up to ten, its a seven and that's perfect.
One thing for sure is that the Kernel Brewery rarely disappoint.
Posted by arn at 22:36 > 3 comments

Labels: kernel
Email ThisBlogThis!Share to TwitterShare to FacebookShare to Pinterest 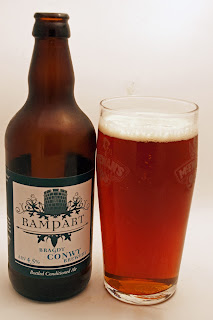 I have had a couple of bottles from North Wales brewery Conwy before, and their Honey Fayre beer was the re-labelled Welsh Honey Beer for M&S.

This bottle 'Rampart' is a 4.5% bitter, I cannot remember where I bought it, 500mls and bottle conditioned. In fact the conditioning is quite good, the beer has just a little carbonation, not to much but just enough to give it life and a little lift. Golding and Fuggles are hops used in this dark bitter.

Aroma has a hint of caramel and spice, and quite malty, there remains a smallish head throughout, on a dark copper colour.

There is more caramel and spice in the taste, on top of rich figgy fruit, and a small bitter finish. There is a strong woody element, and the alcohol shows its strength too. Quite enjoyable bitter overall.
Posted by arn at 22:31 > 0 comments

Brewing monks and a real IPA

Two news stories from the last couple of days that have caught my eye:

For centuries, English brewers have shipped beers to India. Now the subcontinent's entrepreneurs are developing their own. Andrew Buncombe reports


and from the Guardian

and
Ampleforth's new beer - the movie(s)

Labels: news
Email ThisBlogThis!Share to TwitterShare to FacebookShare to Pinterest

For my wife's birthday we had decided a week ago that we'd go for lunch at the King's Arms at Pentyrch just outside Cardiff. I'd read a while back that although it is a Brains pub that Otley brewery had taken over the lease.

So bit of a surprise yesterday not five minutes after I'd rung and booked a table that Brew Wales blogged about their 'Grand opening' this weekend, with live music, BBQ and a beer festival. 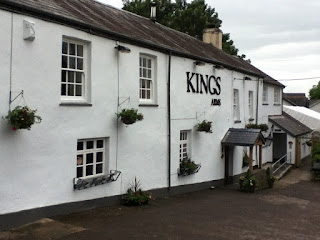 Now with a new paint job, the small 'snug bar' being very homely, the larger bar with a smart and classy looking interior, it's certainly pub you'd be happy to wile away a few hours.

Today they had the permanent pumps, Brains bitter and Otley 03, joined by guest beer Butcombe bitter. Ordering from the spring lunch menu I had the Goan beef curry, with rice and a few chunky chips. I ordered the Butcombe to start with whilst waiting, in great condition, long dryness, clean, good and bitter. You can see other menu choices on their website.

The curry was really good, properly dry and perfectly cooked beef, my wife enjoyed her meal also, and we ordered a raspberry cheese cake with new season raspberry's, and chilli and something else compote,  and this was excellent also. 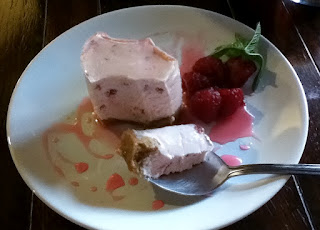 The Otley 03 BOss, labelled chestnut red, was good also, perhaps a little sweeter than the Butcombe, but similar dry and good hop bitterness.

Overall a good lunch, well worth checking this place out again if you know where it is. Good choices on the menu, reasonable priced for the quality your getting also, and good conditioned beers.


And chatting to the staff behind the bar today it sounds like, despite the weather, they are planning a great weekend so get there if you can.


It was friday, it was Wales, it was raining.

Actually the clouds lightened up a bit as I walked to the festival, texts informing me that my partner in crime this year (cruelly his wife made him go on holiday last year) had arrived and started without me. Well I would too! 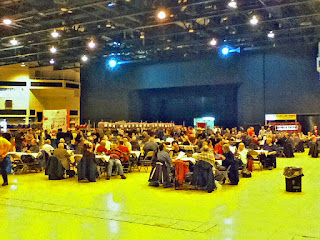 Just the same as last year I made sure the first drink was one from Otley that I'd been unable to locate before, this one being '07 Weissen' (5%). And a great start and a kick in the senses for your first afternoon drink it was too. Cloves, orange and great wheat taste in a hazy yellow half glass. The bitterness was great, drying my mouth completely.

My next was more out of curiosity for the brewery more than anything.
I'd not heard of the Pixie Spring brewery before and they were listed as being based in Llantrisant which is quite close to me. Their Prince of Bengal IPA had already sold out so I went for the Deliverance APA. This had the cask labelled as 'Hazy' although it was only lightly so,  its 4.5% with 4 hops in it, some I suspect are the 'C' crowd as it gave some lovely lemon, perhaps grapefruit mostly, with a good dryness, light and fresh, very enjoyable. Later I found some of their flyers which listed a 'Black Army Stout', which was a beer I tried last year from the 'Llantrisant brewery' so I'm assume Pixie Spring is their new name. One to watch in Wales.

The Tiny Rebel brewery from Newport have only been going a few months, I did a 'Meet the Brewer' Q&A with then back in February. I'd only had their FUBAR before, fantastic it was too, and the display looked might impressive and extremely busy. Looking at various tweets before I even arrived I knew that FUBAR through the Hop Rocket, beers infused by being pulled through fresh hops in-line at the bar, had been the first beer to sell out on the first day. Restocked, I realised I had better get there soon before it went again. The hops being used were Amarillo according to the chalk note, the beer being the replenished FUBAR, a 4.4% APA, light yellow in colour, citrus and grassy, biscuit malts, very good.

By now I'd managed to introduce myself to a very busy Gazz and had a good chat, top bloke, happy to explain the workings behind a bar at a busy beer festival, their beers and future plans. I'd moved onto their 'Dirty Stop Out' after talking about smoked beers with Gazz, its a 5% smoked oat stout.
There is a good amount of smoke with it, small hits of dark chocolate with nice bitterness, with great smoothness alongside some vanilla, plus some spice that tickled the sides of my tongue.
They want to make it smokier, I've no complaints with that, but this was by far my beer of the festival as it was.

By now we'd jumped into the seats of a couple who barely hinted they were putting their coats on, you have to be that quick. Obviously there was more tables than last year again but with the popularity of this festival plenty more tables and chairs are required. The new token system seemed to work better from a punters point of view, no more losing torn off tickets.

Next up, Celt Experience 'Silures' , listed as a golden hoppy ale 4.6%. Grassy on the nose, golden yellow, but I got a lot of butter from it, too much for my liking, it was a struggle to finish this to be honest. Shame as all their beers I've had before are pretty good, I'll have to try it again and give it a 2nd chance.

The foreign bar was considerably lighter on choice than previous years, Czech Budvar providing 3 (well technically 4) options. The Original and Dark were on offer, plus a 'half n half' tap that drew from both lines. The other beer they brought was 'Yeast' 5%, an unpasteurised version of the Original, and this was the one that tempted me. Cold, obviously, crisp and clean, bitter finish, malty but balanced lager. Wasn't terribly exciting though.
Hopefully next year the organisers will go back to having a larger selection of foreign beers, on tap and bottled.

As I said in my pre-festival post the Waen 'Chilli Plum Porter' sounded like one to seek out. When I went round it seemed to be very popular, and I now know why. At 6.1% its a gorgeously fruity beer, subtle on the chilli, lovely spice floating around the mouth with a dry edge to it. Very good beer, I'd love to sit back with a pint of this again.

Going light again I plumped for Ilkley 'Mary Jane', 3.5% pale ale which was pretty good, very dry and hoppy, thin body but great flavours for a low abv beer. Would be a great summer session beer.

I turned back to Tiny Rebel at this point for the new 'Cwtch' a red ale 4.6%, brewed also with only 'C' hops. Great malty tones, herbal notes and taste, with matched citrus/lemon from those hops. Some caramel sweetness also. See Beer Lens for a great shot of the pump clip.

Up to the Brains bar next for one new to me, Jack Black, an oatmeal stout at 4.3%. My notes say a lighter body than the 2 previous stouts/porters I had that day, good roast flavour, good long bitterness, very pleasant. I also took a half of the Organ Morgan, a 4% golden ale, my notes underlined 'floral' in their description of the beer, it was a nice and smooth and a good way to end the evening.

The awards of the festival were announced whilst I was there, overall winner being the Barley Wine 'High as a Kite' from the tiny Heart of Wales, which was nice to see a speciality beer winning a national award.

If Tiny Rebel can maintain the high standard they have set so far with their beers I predict they will be picking up some awards next year, no doubt about it (to be eligible you have to have been brewing for a year).

Thanks to Cardiff CAMRA for another great festival.

Great Welsh Beer and Cider Festival 2012
This Thursday 7th June will see Cardiff host its yearly CAMRA festival, at the Motorpoint Arena (CIA) until Saturday.
Organiser and Brew Wales blogger Arfur Daley has already blogged a few posts on its progress and his hopes for this year, and I must agree with him that the Brains and Tiny Rebel Breweries stands and beers are looking impressive, amongst the many others, giving us a massive choice headache (or is that to follow afterwards?!)

I’m hoping to attend on the Friday, and I’ve already been looking at the beer list on the official website which was last updated yesterday.

A few have interested me such as the Celt Experience ‘Silures’, their bottles are generally very good and this one is new to me and worth seeking out I think.
The new Kite Brewery have a few to try, their Thunderbird was very good when I had it in Tenby. As always a great selection from Otley, the O7 Weissen is one I’ve not before though and will probably tempt me.
The Waen Chilli Plum Porter sounds very interesting!!
And if you haven’t had the Mango beer from Zero Degrees then I can highly recommend it.
Most intriguing name listed? Surely is has to be Brecon’s Genesis 1.ii The Prophet's Porter!

On the website they list only three beers from the foreign bar, all from the Czech brewery Budvar, and the unfiltered pilsner certainly must be worth trying. This is a fairly limited choice compared to previous years so I’m not sure if this is all that’s on offer.