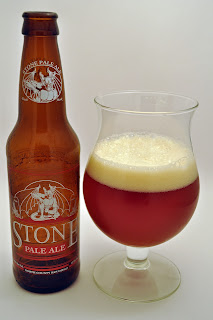 Stone Brewing Co, a giant in the US brewing industry, the largest in Southern California, have several beers that are probably well known to most of the beer drinkers who read this such as their 'Arrogant Bastard Ale', 'Ruination IPA' and the 'Sublimely Self-Righteous Ale'.

This is their 'Pale Ale', 5.4% abv.
A deep amber colour, nice white head, strong caramel aroma, with pine and a lighter citrus hop.
Taste, on a medium body, is of initially some sweetness but then the oily pine bitterness comes through, its sticky also, marmalade oranges, with a good toffee malty body.

Cracking beer, a great example of the American Pale ale, why do supermarkets stock some of the rubbish they do when they should be stocking this I really don't know.
Posted by arn at 22:44 > 2 comments

This is from the 'craft brewery' of Brains, run alongside their main South Wales brewery. This beer was brewed in conjunction with Simon from the You Tube 'Real Ale guide'. Described as an 'American Style IPA' it is 6%, 330mls, and available currently in Tesco's across South Wales. 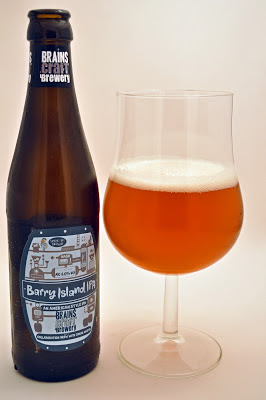 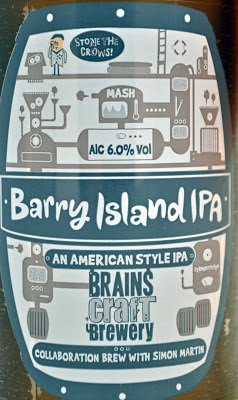 Marmalade orange body, very small head that soon goes. Nice but light aroma, some orange, a little pine, tropical fruits. Taste is on a medium body, obvious malt backbone, toffee sweetness, with gentle citrus bitterness that takes a while to come on, it needs time to break through but its nice when it does.

Overall its a nice beer, I wouldn't go so far as to say its an American style IPA, the malt and sweetness is too forward while the clean hop punch in the face bitterness you would expect is lacking, but I certainly enjoyed it.
Nice labelling too for the 'craft brewery' beers so far also.
Posted by arn at 21:45 > 0 comments

A surprise during the weekly shop today, Tesco had rearranged their beer isle again, but also had quite a few new bottles, and timely too as a fair few could be indulged for International Stout Day.
They had the beer reviewed below here, but new stouts also were Belhaven Black, Glencoe Wild Oat Stout, Brains 'Jack Black Oatmeal Stout' and Castle Rock Black Gold.

The Welsh contingent has also been increased with a new one from Tomos Watkins 'Blodwens beer', two each from Great Orme and Conwy, and Brains have extended their range on the shelf with bottled versions of  Organ Morgan, and from their 'craft' brewery the Barry Island IPA.
They also had three of their 'Simply' range including a 'Dark Ale', which were 3 for £3.

Lets get back to the black beauty in hand though, a beer that's often listed in 'best beers in the world' books, Wye Valley Brewery's Dorothy Goodbody's Wholesome Stout.
4.6% abv, 500mls, and I got it as part of the 4 for £6 deal but individually I think it was about £1.89. 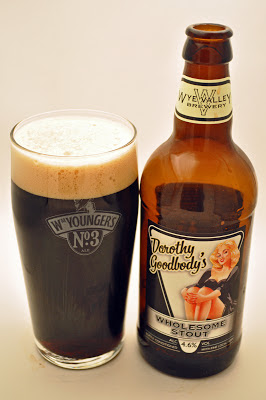 Although it got a good head for the photo I did have to pour it from a little height to achieve this as it was not appearing otherwise. The aroma was a little difficult because I have a cold currently, but I got the light coffee and roasted malts easily.

The body is light to medium for a stout, dry, coffee again, light hints of milky chocolate, cream.
It sounds strange to say its just an ordinary stout as it ticks pretty much all boxes you would expect, and then it seems odd then if I say its not terribly exciting. What was I expecting? what is it missing? perhaps a little more body if I was being overly picky, but this is a beer I would drink again any day, absolutely. Contradictory yes, but its only beer.
Posted by arn at 08:30 > 0 comments 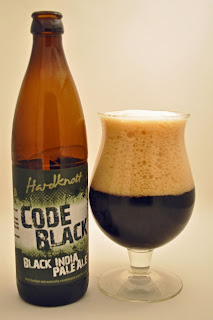 I've been a bit hit and miss with Black IPA's so far, but scored a big fat hit here.

Hardknotts's Code Black is 5.6% abv, 500mls, and I handed over £3.29 for it. Although seen on the blogging merry-go-round alot I had not seen any bottles myself before, and I also got their Colonial Mayhem, the mild that weighs in at 8.1%!

Pours quite lively as you can see, lovely mocha head, an aroma that was sharp fruit and malts, some coffee. The body was thinner than I was expecting, but lovely tropical fruits, something that's burnt (if that makes sense), perhaps the coffee. The lightness moves round the mouth very well, and a long bitterness, although not a harsh one, carries on. 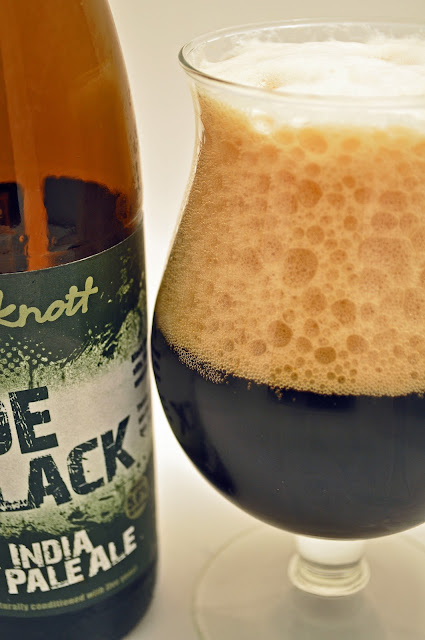