Quick post, popped into Tesco tonight and bought a few of the bottles new to their shelves. 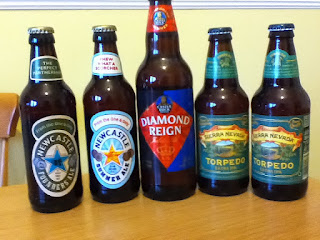 Wandering down to the 'world beers' section where they are having a run of 'price drops' on quite a few of their bottles i bought:

and for some reasons also in the world beer section are:

Another great week in Cornwall was had by our family and our friends, so much so plans for next year are already set out.

The last couple of years we've endeavoured to try all that we could find from Cornwall's breweries, a  search on here for 'Cornwall' labels shows a lot of the bottles, and one of my flickr sets shows many others too.

This year we were aware of the number of beer runs we had done in previous years, and with the cost of petrol these days we planned ahead a bit better, bringing some beers with us, and buying a bit more selectivly when shopping in the week.
One thing we did was to aim to bring a couple of beer boxes with us, my friends bringing a 10litre from their local Ringwood brewery of 'Boondoggle'. I had hoped to bring a one from Otley via Real Beer Box as its within pick up distance for me but unfortunately they had none available, awaiting delivery of the boxes. 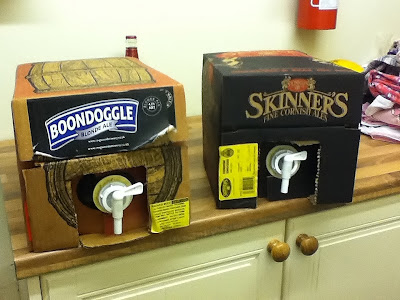 The Boondoggle is a 4.2% blond ale, in the box it was sediment free so the settling period was short.
Light, amber gold in colour, with a fruityness, and floral and grassy hoppy notes. Very drinkable, this was emptied swiftly necessitating further beer purchases.


On one of our days out we passed through Truro and I spotted the Skinners Brewery sign and headed in there and picked up their only boxed offering (that day, and at short notice I must add) which was Cornish Knocker.

If you ring the brewery a day or so ahead they can pretty much put any of their range into a box for you I was told, but as I dropped in without ordering this was what was on offer.
It was also still with sediment in it, (this can be removed if you order ahead) and I was advised to let it stand for a good 24hrs to settle. Also if you keep, clean out and return the box when ordering a refill you'll get money off the price.
Cornish Knocker is one I was have had in bottle form, okay pint but thats it I'll be honest, its also a blond ale a little stronger at 4.5%.
However I must say we were all quite impressed with this box, tasted nice and fresh, more body than the boondoggle, it was citrusy with a light bitterness, lemon, caramel sweetness, cereal malts.
Again this hit the spot as an easy uncomplicated afternoon and evening drink that week.

Myself and my two friends also did a tour of the Padstow pubs one evening, I'll write that up next, a lovely place dominated by Rick Stein and St. Austell it seems.

On the last day (friday) we visited the Sharps brewery shop in Rock, something we've done the last two years and I've posted about, picking up some great beers. Selection this year was not as wide, but I found in the fridge bottles from the new Sharp’s Connoisseur’s Choice range. As I still have previous years offerings of the Single Brew Reserve I was keen to add this years bottle for comparison.
My hopes were dashed as I was told they were not being launched until monday next week and not for sale!! A little pleading and I was told I could get them on Saturday but this was still really not going to happen as we were travelling back then.
A purchase of Sharps 'Special' was some consolation however. That lucky man Leigh over at The Good Stuff has a great review of this range. No jealousy here, no sir. Grumble.

Off to Cornwall to drink some more 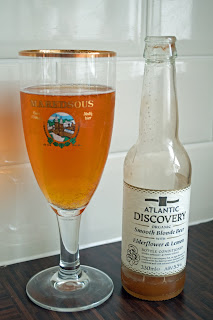 We are off on our holiday down to Cornwall next week, but a couple of weekends ago I drank a beer I bought on last years holiday. I previously reviewed one of these 'fine dining' beers by Atlantic and very nice it was too.

This one actually had expired going by the best before date by almost a year. Great looking label, and I was quite looking forward to this as I had recently been to Zero Degrees in Cardiff and had their new blond beer with Elderflower which was very good indeed.

This was a 330ml and bottle conditioned, 5.5% abv. Conditioning very good, had to be careful on the pour though as it was easily disturbed and floating sediment despite being stored and undisturbed for a year. You can see what I had to leave in the bottle.

Orange golden in colour, aroma is light and hoppy, lemon and orange.

Light body, again the citrus is there and floral elements of the elderflower, which is very pleasant I find. Nice and dry, a little bitterness but not much. A very light summery beer, my wife who is a dry white wine drinker I thought would like this and she did indeed enjoy a taster of it.

Despite not actually using it as an accompaniment to a meal as it is intended it stood up nicely as a late afternoon drink to quench a gardener's thirst.

I've had cause to visit a M&S store a few times recently, whilst waiting for car repairs to be completed. The 2 branches local to me have usually a good range, and as Meer for Beer in her recent run of posts has noted they've also a few new additions to this range, selected and brewed by the countries better breweries.

Inspired by her reviews I first fancied the Sandringham Ale ,then the Greenwich Raspberry wheat beer. 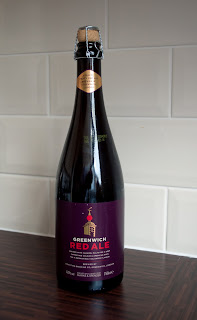 My first purchase was however the Greenwich Red Ale, a wine bottle shape and 750mls, wire corked, and 4% abv beer brewed with crystal and caramel malts for its red colour, and uses 5 types of Yakima Valley hops.
I imagine a few of you are thinking 'hmm sounds like their Yakima Red, their 4% amber ale??' Certainly ratings on ratebeer would agree with that. I have never had it so forked out its £4.99 price tag. 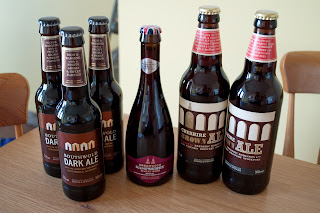 This morning on a return visit I indeed did get the raspberry wheat beer, and noted they have dropped the abv to 4.9% and refreshed the label on the Cornish IPA, and there is a new Bath Ales produced Ginger Ale which I passed on this time.

I then noticed that they have reduced the price of two of the beers from last years lines, the Southwold Dark Ale by Adnams, a 7.2% barley wine that was £2.19, and the 4.7% Cheshire Brown Ale by the Robinsons brewery originally £1.99. Both of these are currently only 99p each, both good beers and therefore worth picking up a few bottles at this price in my opinion. This second photo of bottles cost a very reasonable £5.95 as you also get deal 'buy 6 for 5' offer!

Meantime seem to have a few of their bottles fon the shelves of M&S (and Sainsburys) currently, the two mentioned above, the London Porter, and now also a limited addition Barrel Aged Greenwich Hospital Porter. It comes in a cardboard tube, corked again, 750mls and 6%.
There is a picture here on ratebeer. It is priced at £9.99 which despite the recommendation from 'the guardian' tagged on the shelf, was too rich for my blood I decided. Unless someone has had it and can recommend it at that price I think I'll pass.