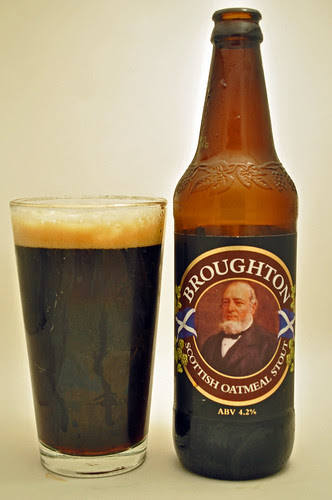 I was actually given this last Christmas as part of my 'secret santa' present if I remember correctly, but that could be completely wrong as my memory is dreadful my wife keeps telling me. At least I think she's my wife, that's what she tells me.

It was one I was looking forward to, as it was one listed in the '300 beers...' book I have, the other beers in the boxset were reasonably good also.

Perhaps I was expecting to be amazed by the beer, built up my expectations, but it was rather ordinary to me. Still though quite drinkable.

The body seemed a little thin, other oatmeal stouts have been heavier in the mouth. It pours with a nice brown head with aromas of rich roasted malt and coffee.

I got again the malt and coffee, chocolate, but it did not taste or feel as smooth as an oatmeal stout as I thought it would. Rather too fizzy, with a light bitterness on the finish.