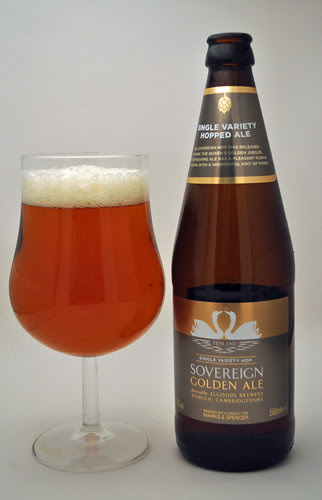 Marks and Spencer's continue to take the best beers from breweries across the country and re-brand them for their stores.
Seeing another beer trend/bandwagon/niche they have released some 'Single Hop' beers, using the hops Sovereign, Citra and Cascade.
All these bottles are £2.69 which is a lot compared to most supermarket beer prices, but they are also 1 pint bottles not 500mls.

Produced by the Elgoods brewery the first was Sovereign, a 5% golden ale. Good golden/orange colour, sweet toffee aroma, and this followed on, i found it a bit too sweet, cloying with toffee and honey, bits of kids sweets from your memories. Not for me. 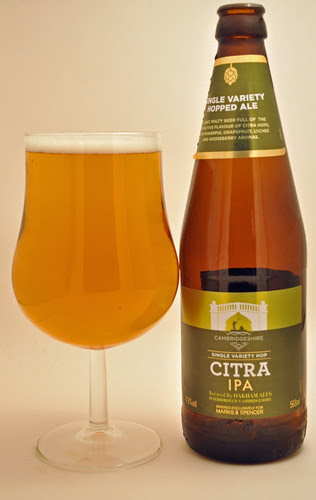 Second up is Citra, an IPA from Oakham thats 4.9% abv which is a little higher than their own well known Citra beer at 4.2%.
More yellow in colour, lovely hop aroma of grapefruit and gooseberry, bags of fruit flavours with that expected bite of citra hops. Very enjoyable. 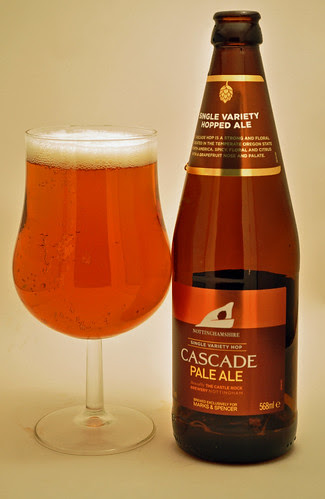 Of the three the Citra was head and shoulders above the other two but I did enjoy the Cascade too, leaving the Sovereign trailing far behind in last. 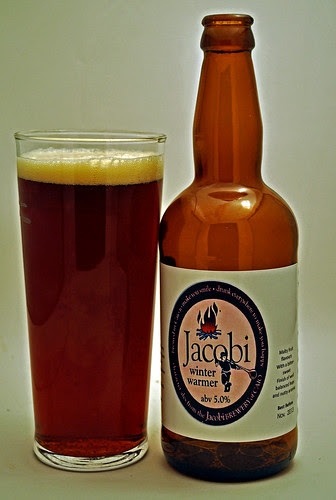 When the sun came out a fortnight ago and ushered in Spring we went for a walk in the Brecon Beacons, there is a mountain centre and walks at Libanus, and it includes a tourist shop, a cafe downstairs which serves some excellent food, this time we didn't eat there but I positively salivated over another's steak and kidney pie with some wonderfully aromatic red cabbage.

A good sign is that there is usually queues for the food, and they sell local beers, with bottles from the Breconshire Brewery which I didn't see until I'd paid for our drinks, although those included one from the Carmarthenshire 'Jacobi brewery of Caio'.

This was an English strong ale 5% called 'Winter Warmer'.
This was a deep copper red colour which had a half finger of head that stays, looks good.
The aroma was strong rich and fruity, whilst the raisins, toffee, a very malt sweetness and heavy alcohol body, is matched with good hops providing a lingering bitterness.
Its not a classic heavy winter beer such as Adnams Broadside, it lacks the body of that but it was a good strong bitter that was enjoyed. And it probably would have paired very well with the pie and red cabbage if I'd had that. Missed opportunity!