Quick link to post whilst on my break at work.
The Independent has a story about the declining number of monks and the threat to beers such as Orval as a result.

Brains Craft Brewery 'A Pils from the Hills' 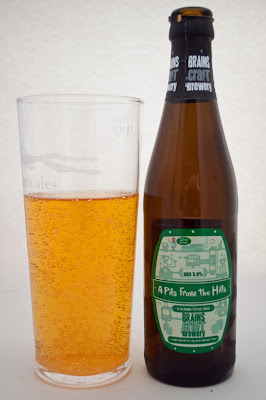 A 5% abv, 330mls, this Pils uses the hops Saaz and Hallertau with a pilsener malt.
'A Pils..' is crisp, light, the hops especially the Saaz are obvious and beautifully aromatic. A nice pepper spice element, lemon, and the over-riding freshness was great. Typically golden and well carbonated.

And that's the problem with these craft 330ml bottles, its over far too quickl!

Another from the truly exhausting list of beers that the Brains craft brewery have produced.
Which again is a fairly decent offering, as are a lot of the beers on that list, but I've had only few which are really really good. They just feel like they are ticking beers of a list of styles, and producing reasonably well made, well crafted beers, and thats great (to drink).

When they take a beer and re-do it, like Bragging Rights (a 5% Welsh beer style called bragawd)  one of their better beers in my opinion, they seem to be tinkering to improve and really getting it right. More of that tinkering  please.