Its been over a month since my last post, and its not been due to any particular reason, just a combination of pre Xmas lack of time, work, an addiction to an app game, and just a thought to have a breather for a few weeks. Beer consumption over Xmas was actually lighter than previous years, mostly due to my work schedule, but I still managed to enjoy a good few.

I've still been reading blogs by others, and it was kinda nice to sit back and just see what others were saying and not put yourself under any sort of pressure or obligation to get a post out there. Not that its really like that, but I wouldn't want it to ever feel like that. My blog started as just a record of what I was drinking and some photos and that's how it should stay.

A few things I'll just tidy up from last year before normal service is resumed. 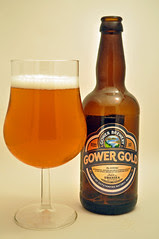 I didn't do the 'Golden Pints' this time, but I will say something about my 'Welsh Beer of 2012'. Although the beers I tried from Tiny Rebel were probably the standout beers from Wales last year, for their range, flavours and sheer drink-ability are outstanding, I unfortunately didn't get much experience of them outside of the GWBCF. Yes I need to get out more.

So for the fact that its a great beer, one I enjoyed over and over again (thank you to my local Spar for stocking it) I'm giving the award such that it is, to the Gower Brewery 'Gower Gold', a golden ale with great use of cascade hops. Full review soon.

Secondly, back this time last year one aim of this blog was to post more about Welsh beers and breweries than the previous year. Well I certainly improved the number, probably up to 35% but I will continue to try and better that this year.

Those who liked the Aldi beer Arcobrau Winterbier should get down to their local store, mine is selling it off at 99p a bottle. Predictably though they are again for Burns night rolling out these beers.