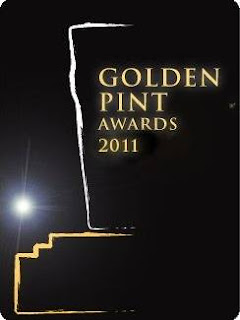 
Best UK Draught (Cask or Keg) Beer:
Oakham White Dwarf (although i understand its changed now so its no longer a wheat beer)
R/U - Brains Dark

Best Supermarket: Tesco - Okay, surprising maybe considering their terrible marketing this year but my one has added many new lines this year I never thought I'd be able to buy just down the road.
New deals for Brains Brewery.
I can now choose from not just Guiness but 8 stouts including the excellent William Bros 'March of the Penguins'.
And take home bottles of Samuel Adams, Brooklyn Brewery, Goose Island and Duvel.

Best Beer Blog or Website:  For consistently a good read, opinions on a range of beer or pub related subjects, some I still don't agree with but enjoy the conversation - The Pub Curmudgeon


In 2012 I’d Most Like To…  Actually whilst continuing drinking great beer I kinda need to spend less!!
See the new 'craft' range from Brains
Hopefully see some from Tiny Rebel Brewing Company  - Newport's new kids on the block.
Posted by arn at 15:16 >