If you read Craig's piece last week on the Gravity Station opening in Cardiff, then this is just an additional piece to follow on from it. If you didn't read it and visit/drink in cardiff I would suggest you catch up!
I received an email a month ago from the manager Jim explaining the progress and idea of the shop, selling bottles and having up to 8 beers potentially available on tap. 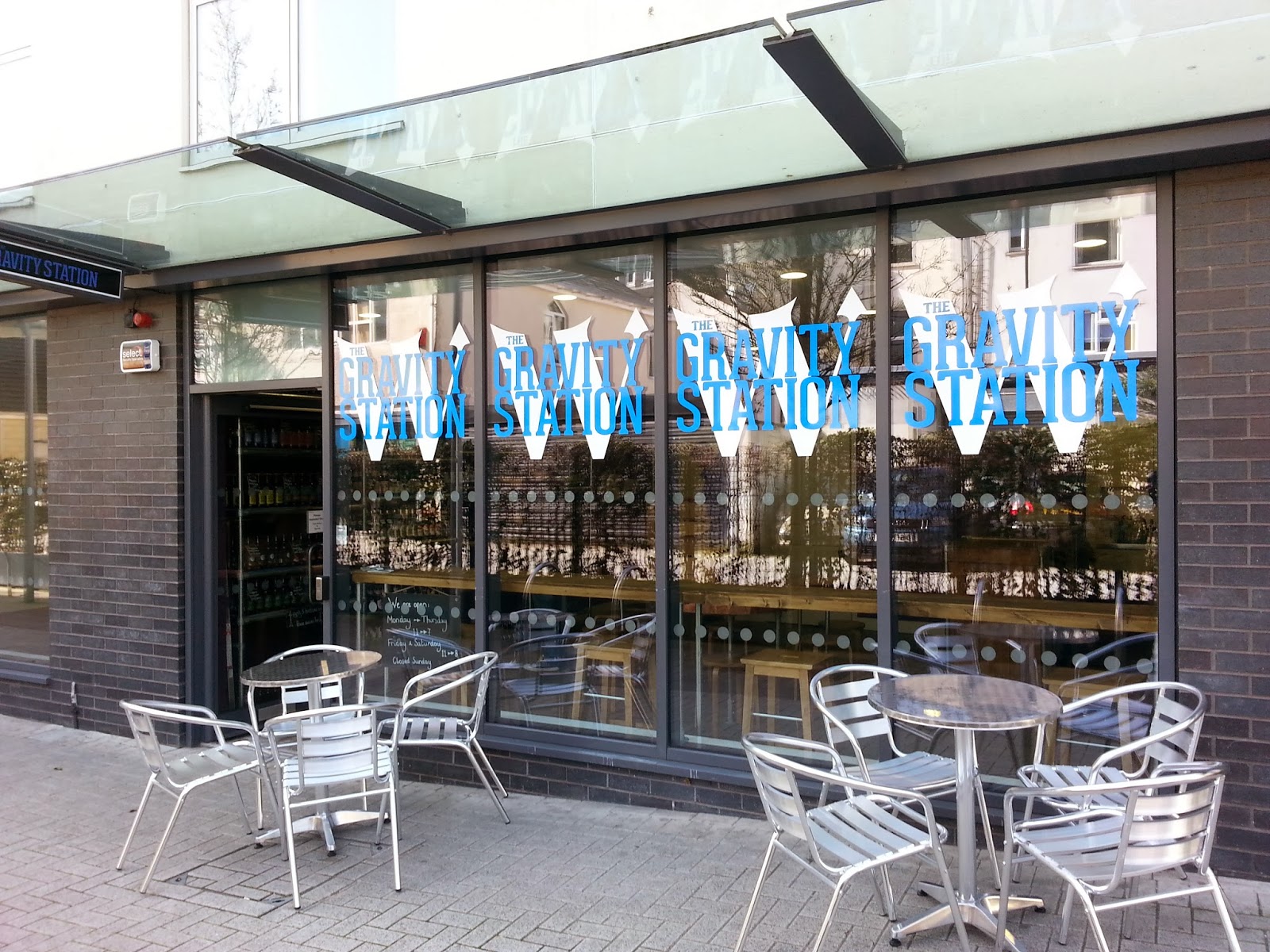 Anyway it opened on Friday just gone, I learnt this via a little exchange with Jim on arfur' s untappd entry for a Waen beer called 'Snowball'. As I was going into Cardiff the following day that nicely fitted into my plans of wandering aimlessly whilst my wife shopped.


As you can see from the photos there is a nice selection of beers European and American, Odell, Flying Dog and Anchor to name a few. Wales is obviously well represented, and owners The Waen Brewery showing off their range, and a nice selection of British brewers including Brew by Numbers whose Nelson Sauvin Saison 01/07 I picked up. The aforementioned 'Snowball' by Waen is a seasonal offering, a vanilla coconut chocolate stout, 7% abv and so I got one of these too.

Monday morning they only had 4 beers for sale on gravity, two from Waen themselves their delicious chilli plum porter and 'Gravity one', and one from the Off Beat brewery 'chocolate stout' which I tried, smooth and tasty. Prices if remembered correctly was £1.75 a half, and they do tasting paddles too. They have seating inside and out, and it was really nice to meet Jim, a top bloke happy to talk about their plans, the setting up and general beer chat. To have somewhere in central Cardiff offfering that range of bottles is an excellent addition to the beer scene Cardiff is developing.
(In the initial period of opening they are still awaiting the card machines so its cash only) 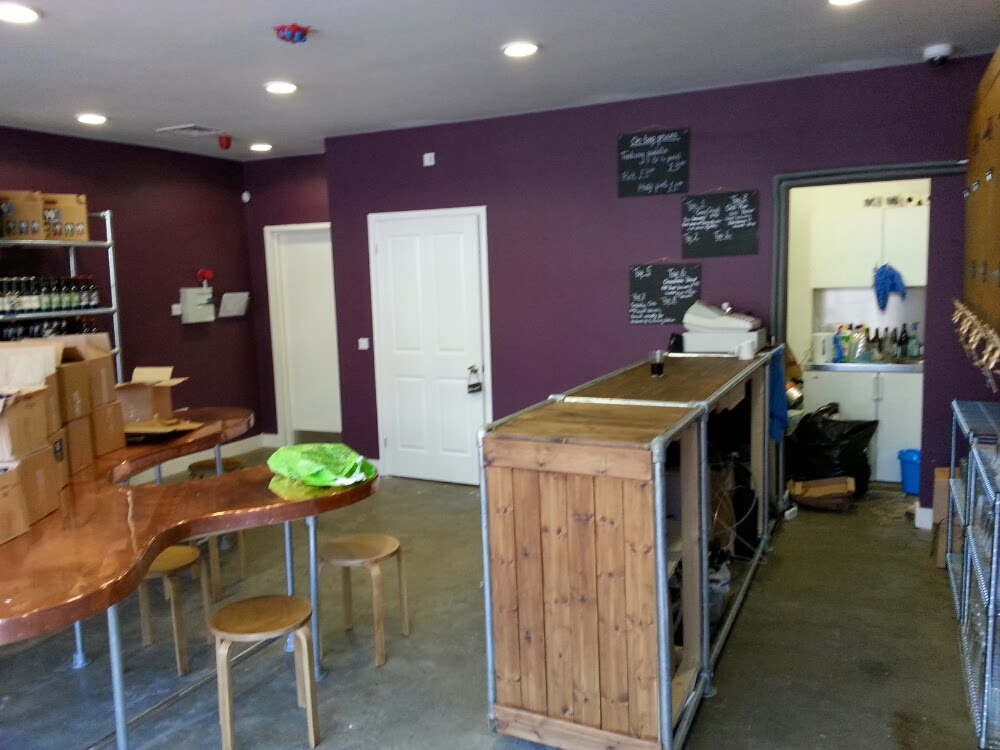 After I met up with my wife we went for lunch at the Grazing Shed which is a couple doors along from the Gravity Station, it's a 'gourmet burger' establishment , all ingredients are locally sourced, welsh beef, chicken and lamb, drinks too. I had the Uncle Pedro beef burger which was really good, nicely spicy and fresh, and you can do meal deals of a burger and a beer or cider. Celt experience and Artisan brewing co. are available, I had the latter's hefeweizen which was excellent.

it's all gone crafty!

(Adopts booming voice)
Yes it's craft craft craft here at Tesco.
You too can be hip and happening, drink cool beer, and not need hang around in craft beer bars with people that have tattoos and strange facial hair.
Now that Tesco is stocking more more more craft beer from small independent breweries such as Greene King, Marstons, Fullers and Brains. Gasp at the range, bask in the coolness of a beer produced in a shed/nanobrewery round the back of the car park of the megamassive main brewery.

Ok so a bit piss takey but it's how my mind worked when I went into the mega super massive Tesco yesterday. 'Oh new bottles' I thought as I looked on the shelf, and quite a number of new ones too. Quite a few were 'craft lager' but a red ale and a hefeweizen also.
If stocking Brains Craft beers most shop's will only have Barry Island IPA and Boilermaker, so it good to see some new ones, 'Bragging Rights' which is a braggot style ale and quite nice, and ' Ides of Marzen'.
Looking at the other bottles though you soon notice they are all from the larger breweries, mentioned above.  Over the last week a few bloggers have been commenting on the Sixpoint beers appearing in Wetherspoons (and I hope to get some soon) and it possibly being a turning point/milestone for craft beer (and I hope it is) I look at these on the shelves and do wonder. With the power and foot already in the door that these big breweries have, and the almost instant ability to supply the 'latest trends' you see small independent producers could always be struggling against the tide. 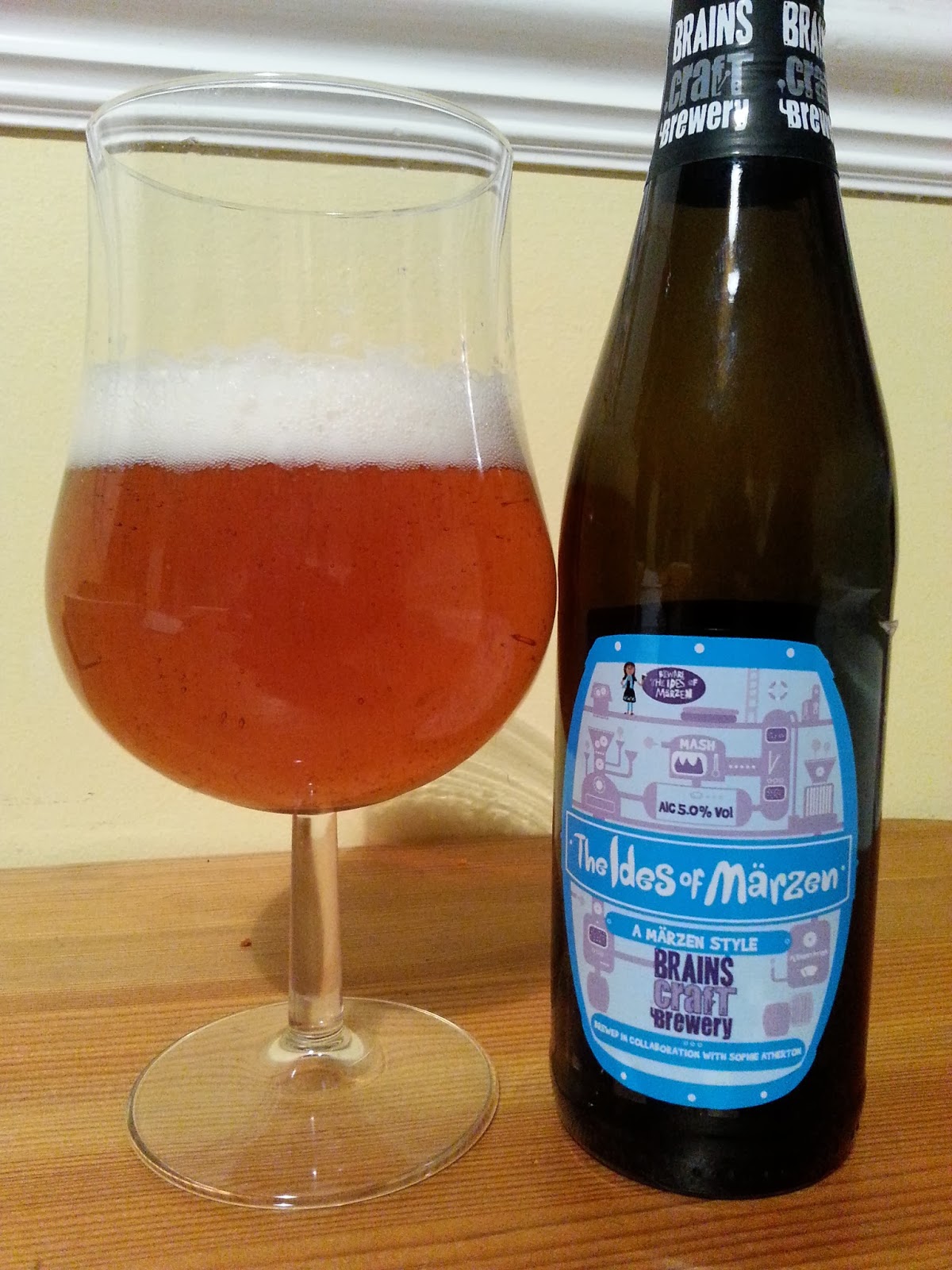 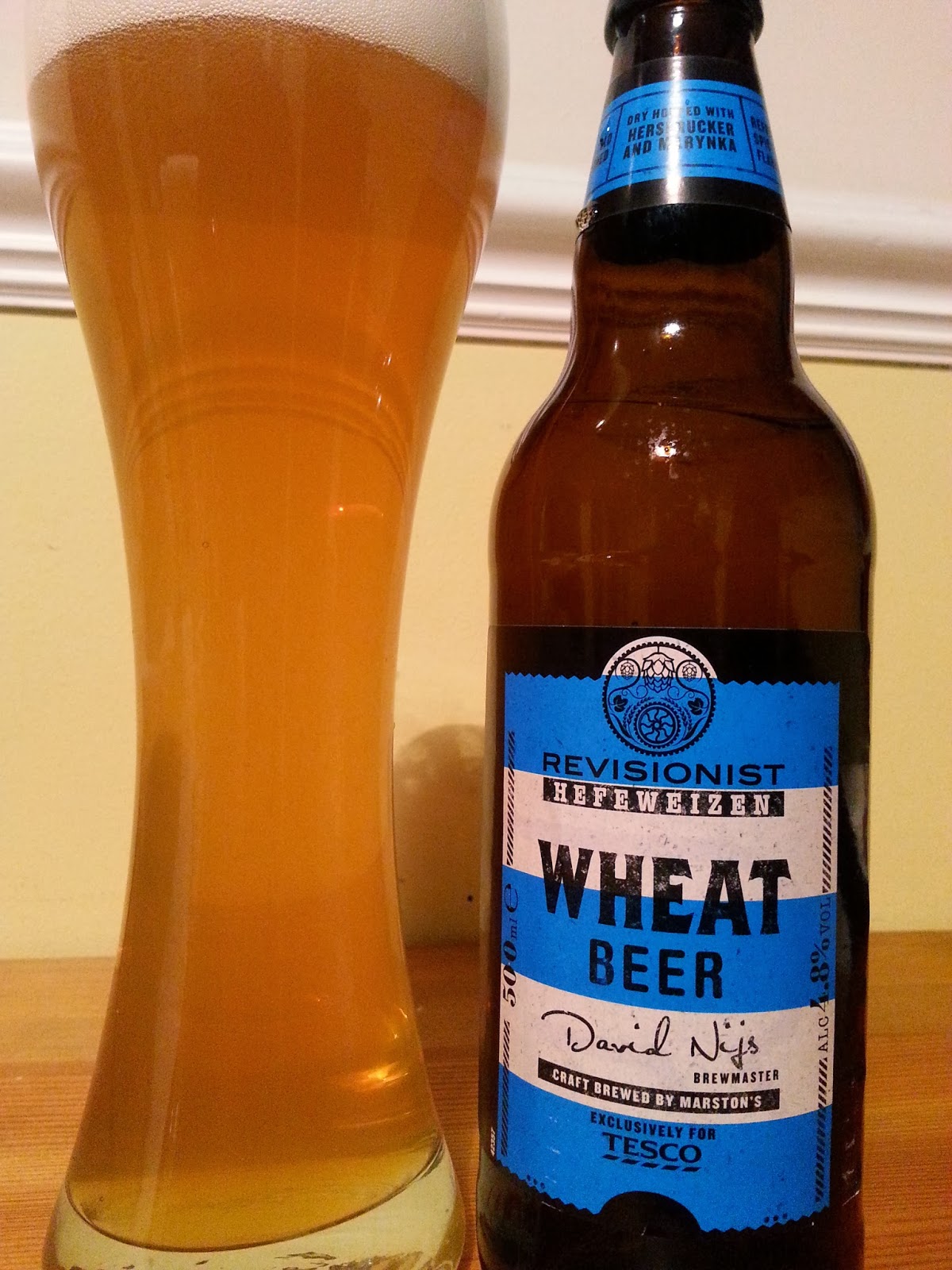 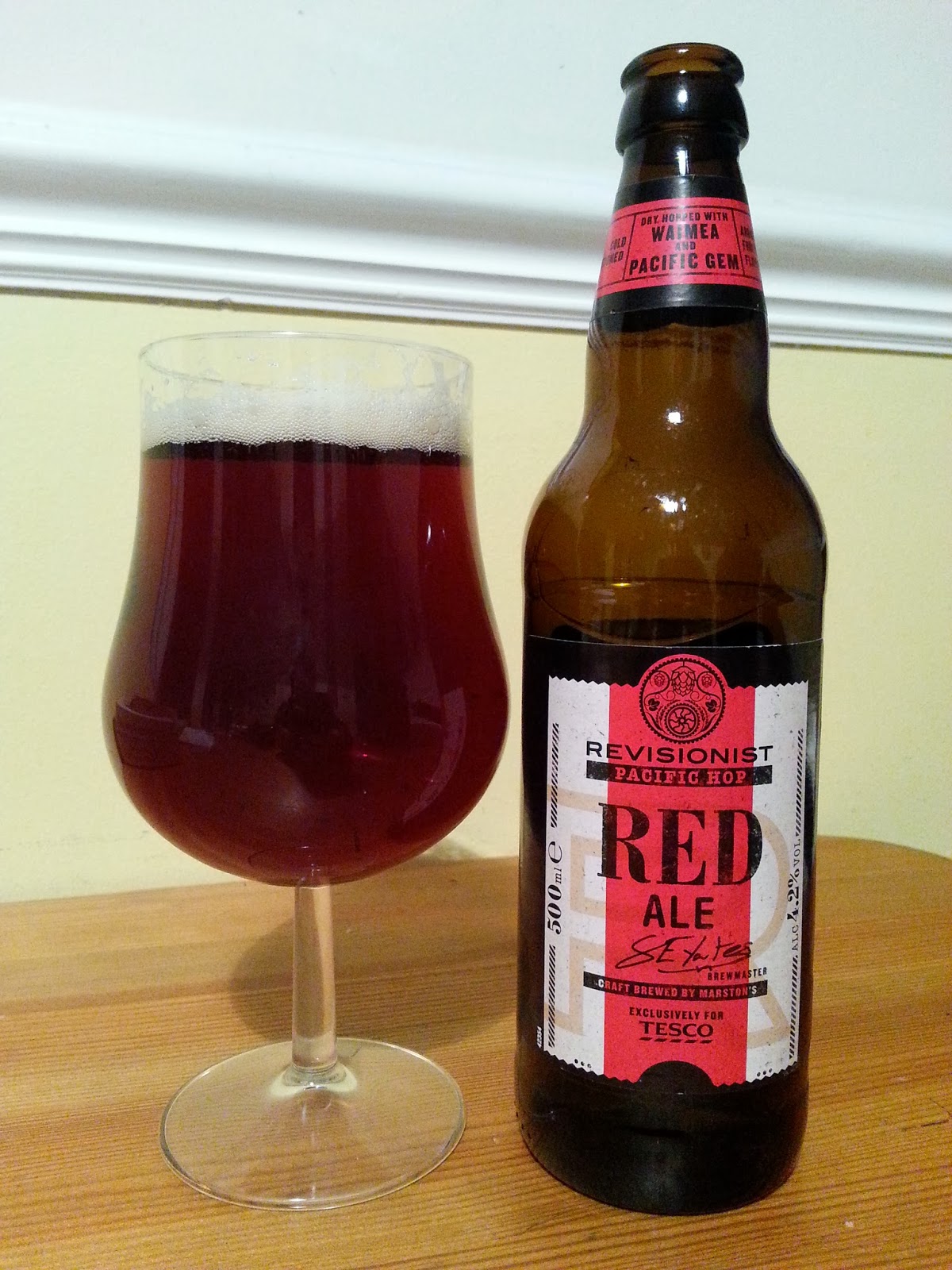 Anyway enough thinking it hurts my head. What about the beers, and yes I did buy some of them, like you I like to try new ones when I see them.
The two Marstons 'Revisionist' label beers I got were the red ale and wheat beer. Both being fairly innocuous, the wheat beer being a bit spicy but otherwise bland as a very bland thing. The Brains Craft marzen was nice but I prefer the 'Bragging Rights', nicely spiced and balanced.
I also picked up one from Greene King 'Suffolk Strong' because it says its been blended with their old ale 5x.
Posted by arn at 22:45 > 2 comments

After a few days in Tenby during half-term, expecting poor weather and being pleasantly surprised that most days stayed dry enough to get on the beach with the kids for walks and rock pooling, I thought I'd post a sort of beer update on the town. (My previous post on Tenby's beer scene.)

The Lamb pub, owned by Marstons, has been closed.

The Preseli brewery which is based in Tenby has changed its name to 'Tenby Ales'.
I've yet to see any of their beers on cask in the pubs I've visited surprisingly, but I saw their bottles in a Welsh tourist shop on Frog St. and in the Deli. But I'm not buying them at £3.69 a bottle, they were pretty ordinary beers when I tried them a couple of years ago, and unless they've significantly improved i'm not sure they can justify those (tourist) prices.

The Brains pub 'The Crown Inn' now also serves an ale straight from a cask on the bar, that day it was from their Craft Brewery 'Farmer Walloon' a 4.5% saison which was ok although a bit tired and tellingly they took the cask off soon afterwards.

The Giltar Hotel up by the South beach has one cask beer on in the bar that's open to non residents. I had Celtic Pride from the Felinfoel brewery, which was perfectly fine but uninspiring to be honest. 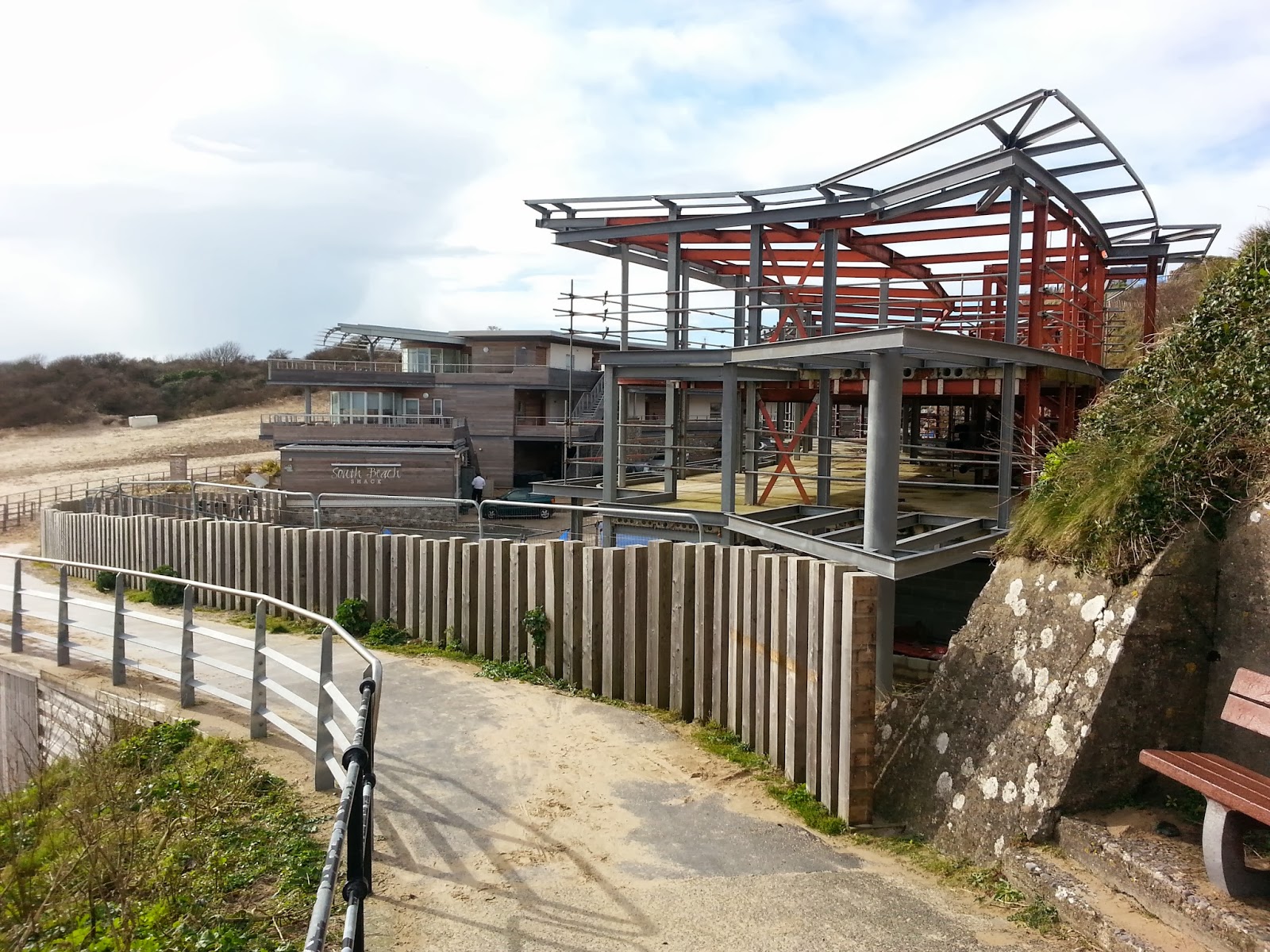 As you can see the eyesore that is the Waters Edge development is progressing at rate of knots. Well, no actually its not. A company now in administration has stalled the building work, leaving it as you can see going nowhere. 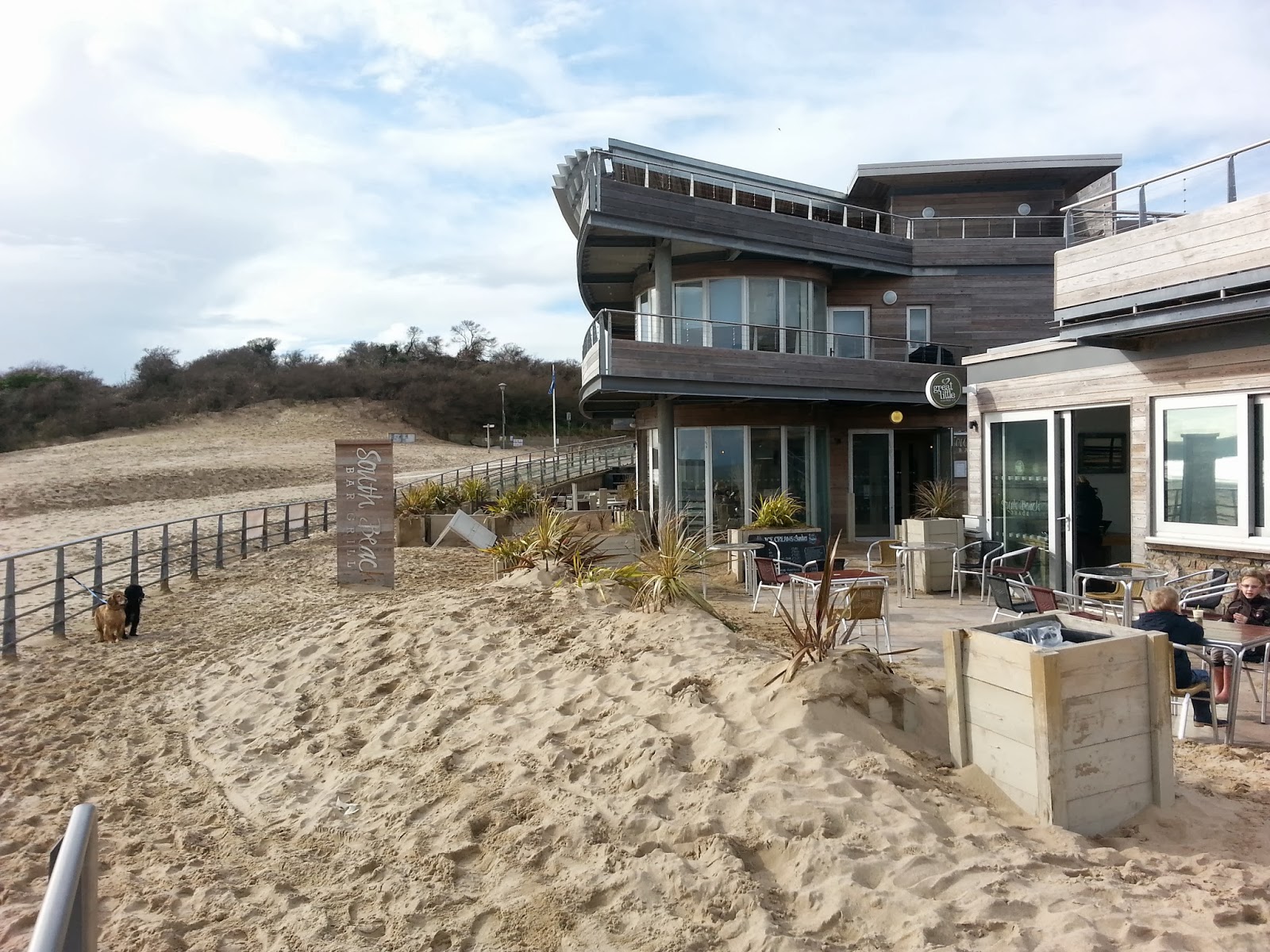 The South Beach Grill, owned by SA Brains of Cardiff is part of the development, and been open for a while. I've not been in yet for a drink, I will remedy next visit. Wonder how much they've been affected by the building uncertainty and delay.
A photo on their Facebook page showed a van delivery from Brains and the Craft Brewery so it will be interesting to see what's on sale.
As you can see in the photo they've had to dig themselves into work following the recent storms!

As always the best pints I had were in The Hope and Anchor, guests on were from Otley, Purple Moose and Skinners.
Posted by arn at 04:02 > 0 comments